Also known as Bandhej, it is a resist dyeing process of creating dotted patterns. Bandhani derives its name from Sanskrit word Bandh, meaning to tie. This is a very simple technique of tie-dye which ensures that the dye is prevented from reaching a certain portion of the fabric that is painstakingly tied in small dots or rings. Bandhani is one of the many tie-dyed fabrics of India.

There are several other resist methods used to pattern cloth such as batik which is a wax-resist technique and dhabu which is a mud resist. Both batik and dabu can be applied with blocks or brushes. Mordant resist is also a common patterning technique used in India. Bandhani is a tie resist technique closest to shibori of japan which uses folding and tying as resist techniques. 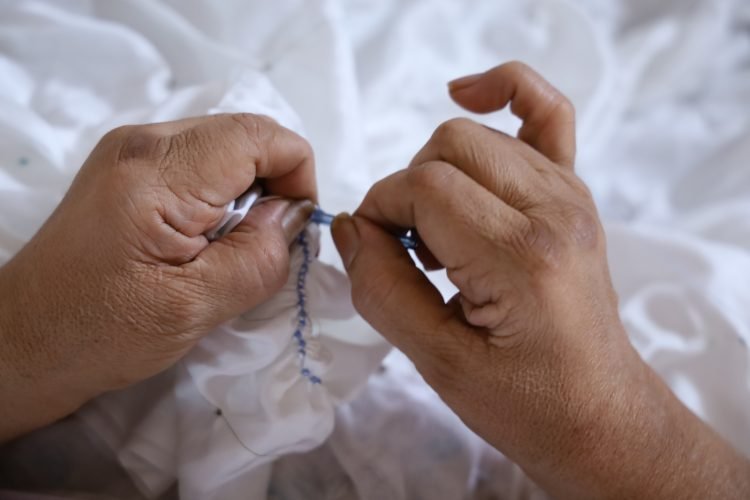 Tie-dye is prevalent all over the world. But Kachchi Bandhani is a technique that is embedded in the roots of the pastoral communities of Kachchh, who had once migrated from Sindh, Pakistan about 400 years ago. A visit to the barren deserts of Kachchh, and one would definitely come to notice the beautiful Bandhani Gaghras (skirts) and Odhanis (veils), worn by the women of the local communities. The Khatri community are the traditional dyers and Bandhani makers in Kutch.

Bandhani is a time consuming and laborious technique. While the men are active in the dying and distribution process, it is the women who tie these knots using a strong thread to bind these knots. Prior to tying, the cloth is first washed to de-gum and remove impurities. It is then prepared in the workshops where designs are stencilled onto fine cotton and silk using a fugitive dye mixed with kerosene. In the case of wool, the designs are marked using a thread dipped in soot and Kerosene. The marked fabrics are distributed to villages and women work on tying these small dots or bindis at their homes, once they have completed their household chores. They follow the outlines to pinch the fabric with a nail or a metal point. The women then bind these tightly using a glass pipe called Bhungali, moving to the consecutive bindi without breaking the thread. For bulkier fabrics like wool, some compress the cloth using their teeth. In order, to make it less time consuming, the fabrics may be folded twice or thrice and then the layers are collectively pinched and tied. It is then returned to the workshop for dyeing and later washing. In the case, of multi-colour dyeing, they may be sent for tying and retying several times in order to achieve dots in several colours. The dyers have to ensure that the tying remains intact and does not unravel in the process.

Each community has a specific style of garment that they wear following a certain colour palette and following a set of motifs often narrating a story. These garments signify a lot about the person wearing them, an interesting example would be the Ludi (head covering) of the Rabari and Bharwad communities of Kachchh, which is a woollen bandhani shawl with dots in orange and green, a bride would wear one which has the suhagadi design and once she becomes a mother she would wear the satbateli design.

Similarly, several other communities have their own distinguishing textiles in which motifs play an important role, some of them are ambo (mango trees), pan vel (flowing creeper design), lehar (a ripple), chauk (a square), keri (a mango fruit) and putali ubhi (a standing doll).

Garcholou is yet another popular example, a bright red fabric, tie-dyed showcasing 52 auspicious motifs in grids. It is a fabric that is held in high regard as a mother-in-law gifts this piece to the bride on the day of her wedding.

Three basic tools are used by an artisan to tie a Bandhani pattern. Dehri, strong cotton thread to resist the area, Bhungali, a glass pipe which is used to hold and tie thread and Naklo, thimble used to pluck a tiny area to tie.

In Kachchh alone, more than 25,000 people earn their livelihood from this craft technique, Bandhani. With the introduction of chemical dyes, a lot of artisans began adopting them instead of using natural dyes as it was more convenient to use when compared to the former. The thread used for binding the dots has also changed over time from cotton to polyester threads.

Bandhani is very close to Injiri’s heart. Bandhani with patchwork is an extension of the way Injiri work with textile as a medium to express colour and form. Injiri garments are constructed through an intricate mixing and matching of multiple forms of Bandhini and its different sizes of patterns coupled with the engineering of the silhouette via pleating.